Artist, actor and model Lauren Tsai grew up living between different worlds – Massachusetts, Hawaii, Tokyo, LA – as well as the fantasy worlds she created in her mind.

A breakout role in Fuji TV and Netflix’s sleeper hit reality show, Terrace House: Aloha State, changed everything, catapulting her out of herself and into the public eye.

Tsai has modeled for adidas Originals, illustrated for Marc Jacobs, and, at 21, is now making her acting debut as Switch in the third season of Marvel’s Legion on FX. In confronting her long-held feelings of self-doubt, Tsai has turned her creative and emotional vulnerability to her advantage, and, in doing so, redefined what a hero looks like.

VM: When did you start making art?
LT: We moved from Massachusetts to Hawaii when I was 7, but I was never into the beach life. That was an easy excuse to be like, “Oh, I’m not like other people, I should just stay inside.” I bought my first drawing tablet when I was in middle school, and that’s when I really started diving into it. I realized that’s what I wanted to do with my career.

VM: Why did you start modeling?
LT: It was the impetus to go to Japan more often. I’d gone on an exchange trip when I was 15, and I became really interested in Japanese art, fashion, entertainment, movies, and everything about the culture. That year I signed with a modeling agency in Tokyo and flew over for a summer to start working. It’s crazy because modeling is definitely the polar opposite to someone who’s just animating on their computer all day. It was my first step out of the digital world I had created for myself, that I felt so comfortable in.

VM: Were you scared?
LT: I was terrified, but I was searching for validation. When I was younger, I never felt confident in my artwork. I was posting online but was too scared to show people in real life. When I got signed to the agency and had people telling me, “You can do this, you’ll be great,” it really made me feel validated. That was dangerous, because I often thought if I looked prettier that people were going to like me more, and that’s not how to live your life. What I learned through the experience is that whether people are criticizing the way I look or my artwork, I’m going to stand by who I am.

VM: Terrace House is more like a nature documentary than a reality show in the way it observes people. What did you learn about human behavior from the show?
LT: Putting myself out there – unwinding everything I had told myself I needed to be, how I felt people were judging me, and just diving in headfirst – it reminded me of the beauty of humanity, that you can truly connect to anyone. Everything we feel is universal. No matter what background you’re from, there’s the space to connect and love people, if you allow yourself that.

VM: How did you get involved with Legion?
LT: I was really in love with acting when I was younger. But when I got to high school, I told myself I can’t do that. I talked myself down from doing a lot of the things I loved, and that feeling stuck with me. When I got sent the role, I taped a scene with my mom in a hotel room, and I was terrified. But what’s the point of being afraid of anything? Life is so fragile and beautiful because we really can direct the things that come to us if we aren’t afraid of them. I realized the only thing stopping me is me. So I gave it my all. I waited for a couple of weeks, then one day I woke up to a text message saying I’d got it and I was like, “Holy shit!” Now I’ve learned not to be afraid of failure. If something comes up that I want to do, I do it.

VM: What did you gain from the doing the show?
LT: I’ve found this incredible feeling of freedom in collaboration with other people. All of us being vulnerable and putting our hearts out there for the world to see, I think that’s irreplaceable.

VM: You live between two different places and explore fantasy worlds in your art. Is escapism important to you?
LT: I’m able to create creatures and draw characters and go to worlds that will never exist. I’ve always been fascinated by stories about normal people getting whisked away into these fantasy realms. Coraline is one of my favorites. I don’t know what this obsession is, but I’m not trying to suppress it anymore. My best work comes from a place of not trying to change myself, and truly embracing my awkwardness, my shyness – the things that make me who I am.

“Something that’s overlooked in the media is that strength is not always loud. Strength and Confidence are not always things that look like the superheroes we see in movies. The emotional side of yourself that’s soft and sensitive, that is a superpower in itself.”

VM: If you could be one fantasy character, who would you choose?
LT: I always wanted to be Sophie from Howl’s Moving Castle. That movie is so beautiful because it’s about this average girl who thinks she’s never going to be anything, but she gets taken away to this magical world and ends up being the hero. Something that’s overlooked in the media is that strength is not always loud. Strength and confidence are not always things that look like the superheroes we see in movies. The emotional side of yourself that’s soft and sensitive, that is a superpower in itself. Growing up, I always felt like femininity and being emotional was my weakness, but I’ve now realized that is my strength. 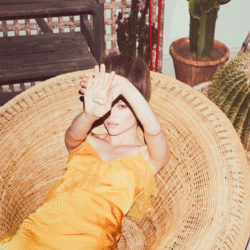